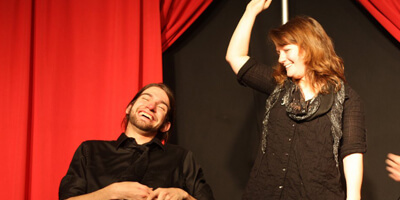 The N Crowd is the most popular location in Philadelphia to catch some amazing comedy. The N Crowd is a short form improv comedy group that performs each and every week. They've performed over 500 times in the city, and each and every time, they're making quite a splash! They have made appearances at many festivals, and they've won many awards, so you know that you're in for a night of entertainment when you decide to come out to watch their show.

The N Crowd provides you with almost 3 hours of unscripted comedy, and it's seriously hilarious! These actors truly know how to put a smile on your face. Every show is different than the one before it, but the level of hilarity stays the same. The N Crowd was names the Best Comedy Club by PHL 17's Philly Hot List, so you can feel good coming here for a night of fun.